Some dude simply known as James has started a blog about the Christchurch music scene called “yrgoldenage” http://yrgoldenage.blogspot.com. I guess you could call it a gossip column. Anyways here’s what he had to say about Missy G and I… 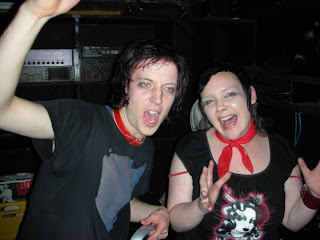 Dr Hitchcock and Missy G at a Mixtape Connection gig.

SCENE ELDERS -ive heard of these motherfuckers fucking up fuckers that mess with thier dj sets pretty bad eh. i’d saty the fuck away from them okay eh, they’ve been around for awhile so they have plenty of tricks up thier sleeves. anybody know who thier ringleader is? those red scarves, maybe some sort of affiliation with blood red pandas/bloodz? anybody know nething about this?