So do we need a background on this Christchurch, NZ and worldwide famous band?

They started around 2007 if memory serves – they’re young, and have done a hell of a lot in a really really REALLY short amount of time. If you’ve heard their music, you’ll understand why.

So the question has always been what does Bang! Bang! Eche! mean, and how did they start. I wasn’t even gonna go there in this review, except I found this comment on a random American blogsite so I had to share:

“We get the Bang! Bang! part, but what does Eche at the end of it mean? BBE’s guitarist/synth player, Charlie explains. “ECHE is native Maori for “awesome partytimes”!!!

They released a self titled EP last year, and have released a follow up titled SONIC DEATH CUNTTTT.

SONIC DEATH CUNTTTT is brash, in your face, dance punk. It’s in the realm of Test Icicles, Rapture, Liars and Gang of Four – mixing punk and rave on another level. Everything works: the bass, the electronics, the guitar, the vocals, the speed, the screaming, the distortion. Only young people can do this well. I don’t wanna hear this stuff made by 35 year olds.

The four tracks, totalling 12 minutes of happiness, tell me to forget about my problems and come party. My favourite track on the EP is Dirt In The Water for it’s blinding guitar riffs and pace. And if you go see them live, you’re going to be happy. Everyone can play every instrument, and you can tell they enjoy it. Another bonus is that Zach vocalises in a NZ accent. YUSSSS.

I’ve always thought this group were great and they’ve surpassed that annoying generic word. They’re tight, exuberant, and the recordings are top notch. I need a new word in another language to describe this band, so because I’m in Japan I’ll do as the Japanese do. Bang! Bang! Eche = SUUUUUUGGGGOOOOIIIIII!!!!!

Jewellery is the best, debut album that I have heard in an obscenely long time. Mica Levi is the 21 year old behind the sound of Micachu – backed by her band The Shapes, and signed to Rough Trade. This album utilises what would commonly be considered mistakes in production – hisses, pops, fuzz, distortion. Some of these crazy sounds can be explained by the customised instruments Mica has made – the “Chu” a guitar with an added bass string, and a pedal which pitch shifts another particular string, the complexities of which escape me. Anyway, it sounds awesome. The albums controlled erraticism forced me to pay attention; it’s fresh, androgynous, deconstructed pop. This music comes from someone who has trained in music all of her life, and has warped the knowledge into something absurdly catchy. As part of Mica’s studies, she composed a piece of music for the London Philharmonic Orchestra, and fans include Bjork and Bat For Lashes. Standout tracks on Jewellery are “Sweetheart”, “Just In Case”, and the Mint Chicks-esque “Golden Phone”. This album is truly brilliant – and if you want more, download the free grime mixtape below. 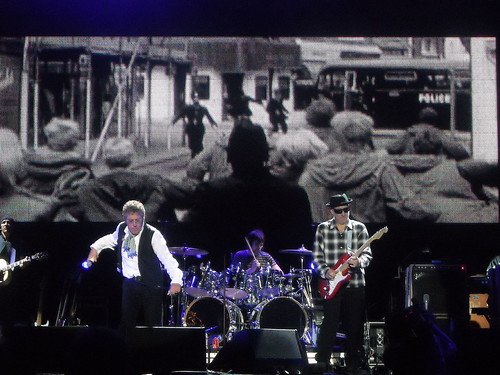 I had high expectations and levels of excitement when I heard the Who were coming to town. I bought an expensive ticket, happily knowing that I was going to be witnessing a huge part of my musical DNA. However, as the concert approached two things ignited flares of doubt in my mind – 1) the fact that the Counting Crows were opening (wtf?), and 2) a disturbing interview I read in Groove Guide with Pete Townshend the day before the show, in which Pete said he hated the Who, wanted to leave, and that he wasn’t even joking. I reassured myself by trying to remember whether Nickelback opened for the Stones, and that concert turned out to be my favourite ever; plus the fact that Pete has always been a slight bummer…

Anyway, the night of the show arrived and on the journey to my seat I encountered an unexpected crowd– extremely drunk bogany/westie/white trash types who were oldish, but didn’t seem old or intelligent enough to be proper Who fans – if intelligent is the word I’m looking for here?? I ended up in a prime position though– I was as close to the stage as I would have been at any pub gig, and I soon forgot there was a stadium full of people behind me. Suddenly, Roger and Pete appeared on the stage without much ado; and to my slight horror, Roger was carrying a mug of tea – way to amp us up, Roger. Pete came out looking like a tired, shabbily dressed old man in Hallensteins garb. I must admit, I was comparing and expecting this gig to equal the Stones, who had everything from the clothes to the attitude from the get go.

When they started to play and sing I could hear the Who; Roger and Pete still have their musical talent. The backing band were great too, but the focus was definitely on Daltrey and Townshend, as it should be. They will both forever be icons, but I think they lacked energy, and seemed slightly over it. I probably expected way too much, but can you blame me? Oh to see the Who in their heyday when they were smashing their instruments and popular attitudes, changing lives and carving a jagged path into music as we know it today. I still appreciate the fact I got to see them – and decided to spend my time taking as many pics as I could to immortalise this experience in my life.

The first act I saw of the day was the Black Kids – who, to be fair, I’d only heard one song from (which I don’t like). The band was tight; but when the singer asked the crowd in his drawly accent “are you having an alright time?” I responded “yeah, I guess so”. I will say that the lead singers voice was pretty unique, reminding one of an early Bowie.

Afterwards we had a wander around the grounds in the pleasant sun with partial cloud and a southerly breeze (bliss), and saw a bit of P Money’s set in the Boiler Room. He had some good classic hip hop tunes mixed in with longer renditions of his own songs. Went and watched the Ting Tings in the Beer-Corral and I think the word that best describes this duo is lacklustre. Catchy songs, but live they don’t translate.

We decided to wait to get up front for TVOTR, and with the new stricter security systems they have in place, we waited a long time to get into the D. It WAS made all the more enjoyable by Pendulum though, who seriously play the most fun DnB I’ve heard in ages! When the literal green-light was given for the crowd to enter the D, I was almost crushed by the desperate mob who had to hustle herd-like through the turnstiles to get in. But when we finally entered, it was pure comfort the whole way, actually to the point of having too much room! After their set we caught reliable rockers the Datsuns, who I think if you’ve seen once, you’ve seen a thousand times (not in a bad way – they are steady).

Next up, the irrepressible Mint Chicks, who remain one of my favourite bands of all time after the performance they gave – despite the sound mix being weirdly muddled. It was the first time I had seen them play minus Micheal Logie, and although I did notice his absence, they still have “it”. Songs from the new album “Screens” sounded great – and in general MC fashion, their set did not lack controversy. When told to end their set, Kody announced their last song “Enemies” which they got a minute into…before the Black Seeds on the stage next to them literally started playing over the top of them, forcing them to stop.

The Arctic Monkeys were next on the list, and their songs sounded great, but I wish I had of seen them play at the Powerstation the night before. I think they struggled to exude enough energy for the whole stadium; which I imagine must be quite difficult!

We sat in the stands for Neil Young, who is without a doubt a rock legend. He still has all the moves, his voice was fantastic and his songs were as classic as ever; but after an afternoon of dance, he totally bummed me out! I found myself thinking of all my lost loves and all the bad things I’d ever done…and decided I’d better leave. Apparently the second half of his set got more upbeat, however I’d already ditched Neil for the Prodigy…

I had no idea how much I would enjoy the Prodigy. The energy and intensity of their MC’s Maxim and Keith reminded me of a wild, caged dog. They make you want to scream and dance at the same time. They played all of their old hits, and nothing from Always Outnumbered, Never Outgunned. I really thought they might be a bit tragic by now, they ended up being my favourite act of the day.

I’m already looking forward to what acts 2010 will draw to the BDO.